The District’s Executive Management Team consists of four functional areas: Operations, Logistic, Community Risk Reduction/Long range planning, and Finance. The Operations, Logistics, and Planning areas are each overseen by an Assistant Chief. Each of these senior management positions report directly to the Fire Chief. This team of individuals has the day-to-day responsibility of overseeing all aspects of District services and activities. The Finance Division is overseen by a Finance Manager, which is civilian CPA position that does not hold a traditional fire service rank. The senior managers also attend all of the Board of Commissioner meetings. The Executive Management Team is augmented by an Office Assistant and an Administrative Assistant who fill a broad range of duties and responsibilities that support the entire organization. Organizational flowchart (PDF) 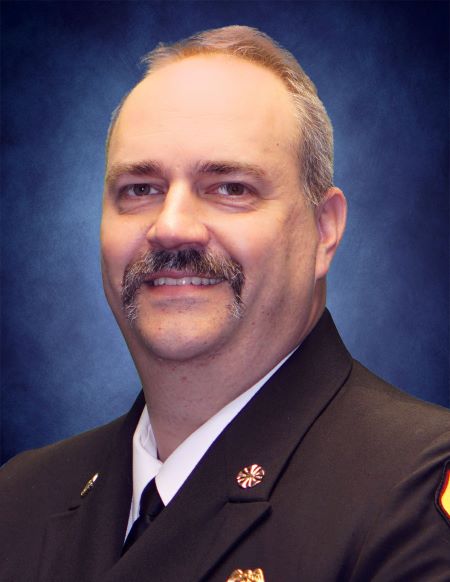 Ben Andrews, Fire Chief: Appointed to the position in August of 2015, Chief Andrews serves as the District’s Fire Chief. Chief Andrews has served in the fire and emergency services for over 29 years. He was hired by the Fire District in 2003 as the Assistant Chief of Operations & Training, serving in that role until promoted to the Fire Chief position. Chief Andrews has found a passion for both organizational and personnel development in the field of emergency services. He has a broad range of experiences ranging from small volunteer fire departments to mid-sized combination fire departments.

Chief Andrews has also served as a reserve deputy and is currently an Incident Commander Trainee on a Type III All-Hazard Incident Management Team. He has a Bachelor of Arts Degree in Public Administration from Washington State University and recently graduated from the National Fire Academy’s Executive Fire Officer Program. He is also a certified trainer for the Ken Blanchard Companies in Situational Leadership II. He and his wife, Leah, are actively involved in raising their two sons Aaron and Ryan. He stays active in missions programs at Sequim Community Church and assists his wife with the home schooling of their children. The family loves the outdoors and enjoys camping, hunting and spending time on the water. 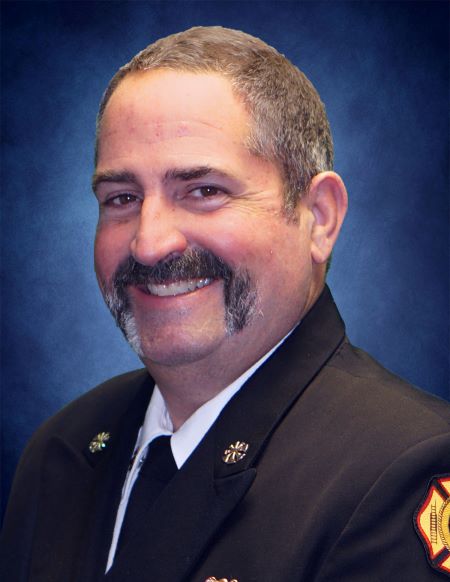 During his career with the District, Tony has held the positions of volunteer firefighter/EMT, career firefighter/EMT, shift captain, and assistant chief of training and operations, assistance chief of logistics, and assistant chief of fire prevention and investigations. Tony is committed to making Fire District 3 better every day and will tell all who ask that he loves coming to work every day. He is dedicated to serving the District’s citizens and the men and women with whom he serves. Tony, and his wife, Donna, have been married for twenty-five years and have two grown children, Jake and Hannah. They enjoy traveling and spending time with family and friends. 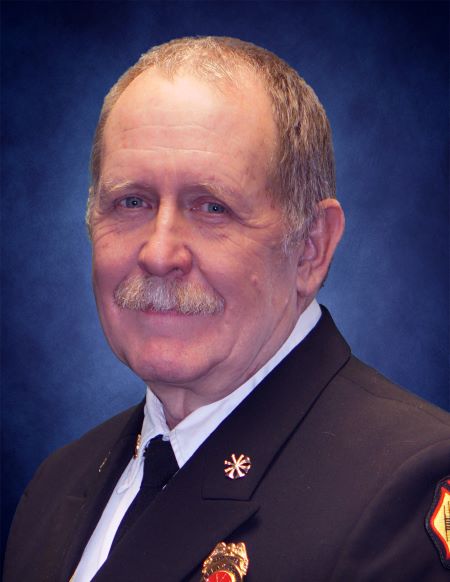 Dan Orr, Assistant Chief – Risk Reduction & Planning: Chief Orr joined the District’s management team in December of 2015 as the Community Risk Reduction/Long Range Planning Chief. Chief Orr became interested in the fire service while stationed in Yuma Arizona in the Marine Corp. He started his fire service career in Pismo Beach, California as a paid – call firefighter. He held the ranks of Firefighter, Engineer, Captain, and Battalion Chief/Fire Marshal. Thirteen years later, he left Pismo Beach as the Fire Chief and became the Operations Chief for the City of Santa Maria. In his 15 year career with Santa Maria, he held the positions of Operations Chief, Shift Battalion Chief, and served as the Fire Chief for the last four years there.

Chief Orr is a certified Fire Officer and Chief Officer through the State of California. He has a Bachelor of Science degree in Vocational Education. He has traveled over the western United States teaching firefighting techniques, basic management, and leadership classes. He has been nicknamed “Chief Doom” by the President of the Board of Commissioners for Fire District 3. Chief Orr is active in teaching emergency preparedness throughout the County. 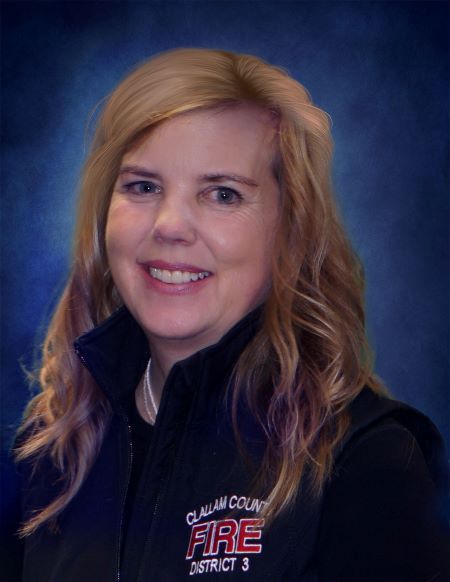 Alwynn Whitaker, Finance Manager: Alwynn has a Bachelor of Business Administration in Accounting from the University of Alaska Fairbanks and started her career in Public Accounting where she earned her CPA designation. After working as an auditor for several years, she served as the Finance Manager for an international relief and development organization where she had the opportunity to work in several third world countries. She has also been the Controller and then Chief Financial Officer of a start-up software company. Alwynn raised her children in Sequim and is originally from Fairbanks Alaska. She is really not the nerd you might think and loves to be outside or working on some creative project when she is not in her office.

Lori Coleman, Administrative Assistant: Lori was born and raised in Washington. She and her husband are active participants in raising their two beautiful children. Lori joined the management team in August of 2014 and enjoys being an integral part of the Fire District family. Lori previously worked as an Office Manager for a local medical clinic for the better part of 11 years. She also served as an elementary school PTA President for two years and before that, was the Fundraising Chair for a very active Non Profit Pre-School. Lori enjoys watching her kids grow up and spending time with friends and family.

Caity Karapostoles, Office Assistant: Caity grew up in the Stehekin Valley in North Central Washington. After attending high school in Olympia, Caity earned a Bachelor of Arts degree in Education and Counseling and an MBA in Marketing. Caity and her husband Burt have raised three amazing children and now enjoy the role of grandparents with their four grand kids. Before joining the Fire District team, Caity worked for the Sequim School District for 18 years as an administrative assistant.  During her time at both the high school and middle school, she oversaw the student government (ASB) programs and taught student leadership at the state level. Caity previously served with CCFD#3 as a volunteer EMT. 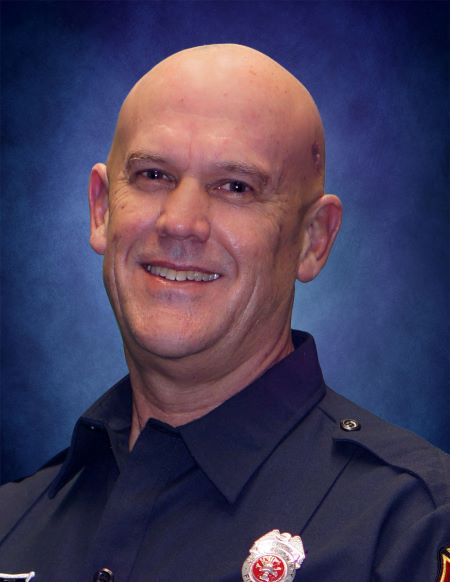 Scott Johnson, Volunteer Coordinator: Volunteer Coordinator, Scott Johnson, began his career as an EMT in 1984, working for private ambulance companies for 2 years. He then joined the US Army Reserves in 1986, where he spent the next 16 years in the US Army Special Forces & Psychological Operations. After his military training, (which took about 2 years), he pursued a career with San Diego Fire Department, where he was hired in 1990; holding the rank of Firefighter for 12 years, Engineer for 5 years, and Captain for 10 years. He was a paramedic for 19 of those years and an ARFF Captain for 8. Retiring in 2017 with 27 years of service, he and his wife moved to Sequim 1 year later. He joined Clallam County Fire District 3 as a volunteer Firefighter in early 2019, and became the Volunteer Coordinator in mid-2020. He & his wife enjoy yoga, riding bicycles on the Olympic Discovery Trail, going to music events & sightseeing. They feel the Olympic Peninsula is one of the most beautiful places on earth! 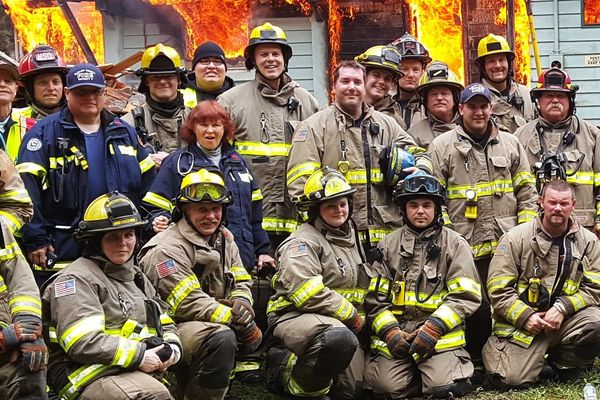